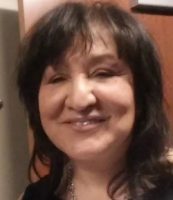 Angela started DHDC in 1997 from her living room “because [she] was tired of burying children”. Ms. Reyes was born in Southwest Detroit, and continues to reside there as a community activist for over 30 years. As a teenager, Angie, began working with ‘at-risk’ and gang-involved youth. She is the mother of four adult children, and has seven grandchildren.

Passionate about education and policy, she received her Master’s in Public Health from The University of Michigan and is known for her expertise in critical policy issues that impact not only Southwest Detroit neighborhoods, but common issues facing other urban areas. Angela has addressed international and national audiences sharing best practices in resolving community issues, including cultural awareness, youth gangs and violence, substance abuse, immigration, educational reform, community-based participatory research, policy development, and community organizing.