WHAT ARE NITROGEN OXIDES?

Nitrogen oxides are air pollutants that contain oxygen and nitrogen with the chemical abbreviations NO and NO2. Together, they are called NOx. When fossil fuels like oil, gas, and coal are burned at high temperatures,  NOx is formed. Nitrogen dioxide (NO2) is a gas with an irritating odor. It absorbs light and leads to the yellow-brown haze sometimes seen over cities. It is one of the important parts of “smog” which contains ozone, another important pollutant.1, 2

WHERE DO NITROGEN OXIDES COME FROM? 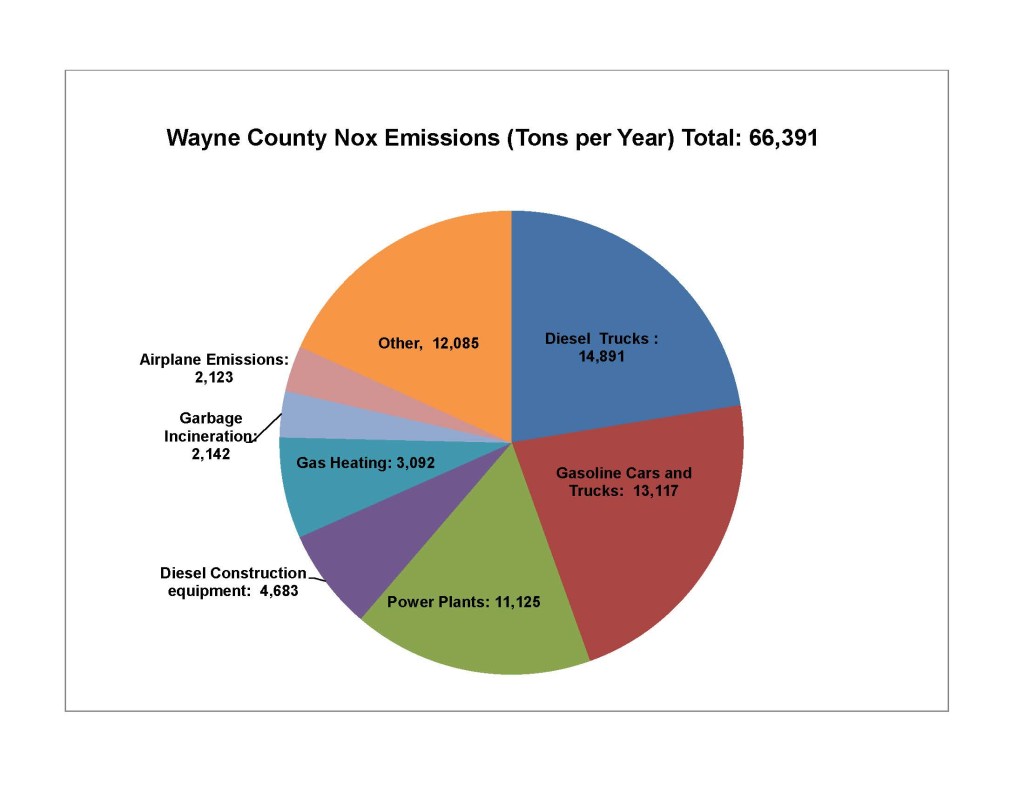 Most NOx emissions in Detroit and southeast Michigan come from “mobile” sources, including cars, trucks, construction equipment, trains, boats, and aircraft.  Other important sources include industrial and residential fuel combustion, including factory boilers, garbage incinerators, and refineries. The manufacturing industry does not account for a large part of NOx released in Detroit.3 Some of the highest levels of NOx are found near major roadways, within about 300 feet. In fact, in-vehicle levels can be much higher than levels that are measured at area-wide monitors.4 However, industrial sources also cause important local impacts.3

HOW DO NITROGEN OXIDES AFFECT YOUR HEALTH?

Studies have shown that NOx at even relatively low concentrations is associated with a variety of diseases and emergency room visits. Exposure to NOx can worsen heart disease, leading to increased hospital visits and early death.5  NOx also reacts with ammonia, water vapor, and other compounds in the atmosphere to form small particles, including PM2.5, which can enter your lungs and cause or worsen lung disease.4 NOx is also associated with:

Ongoing research is also being conducted to determine whether  NOx can cause cancer.

Like most other large metropolitan areas, Detroit meets air quality standards for NOx.7 However,  NOx remains important because it forms ozone, which is a problem in Detroit.8 Both the role of  NOx in forming ozone and its links with other diseases highlight the importance of controlling emissions and reducing exposures.  Figure 1 shows the top sources of air pollution in Detroit.  People who live or spend time near to these sources of NOx may experience higher exposure than the average Detroit resident.

Many houses, apartments, and schools are located near major highways, railroads, or airports.4 Detroit has about 80 public schools within 500 feet of  major highways. People living near major roads and children attending these schools are more likely to be people of color or to be economically disadvantaged.9  This puts them in danger of higher exposure to NOx.

In addition, some people are more susceptible to the adverse effects  of NOx exposure – in other words, at any given level of exposure, they have more serious health effects. People who are more likely to experience worse health effects from NOx include: young children, those over age 65, and people with existing lung diseases like asthma.5

HOW TO REDUCE AND AVOID EXPOSURE TO NITROGEN OXIDES

There are many steps that can be taken to reduce exposure to NOx: