Ozone (O3) is formed by chemical reactions between nitrogen oxides (NOx) and volatile organic compounds (VOCs) in the presence of sunlight, creating ground-level ozone. Ozone is a main part of “smog,” a haze that can persist for several days, decreasing visibility, and making it difficult to breathe.  Ozone pollution has been a serious problem in many urban areas, including Detroit.  High levels of ozone are harmful to health, and also damage plants and materials such as paint and rubber.

Ozone is also present high in the atmosphere, in the stratosphere where jet planes fly.  Here, ozone is beneficial and needed because it removes harmful ultraviolet sunlight, keeping people safe from sunburns.  Ground level ozone does not migrate to the stratosphere.  The presence of ozone closer to the ground, where people live, can cause serious health problems.1-3

WHERE DOES OZONE COME FROM?

Ozone is not released directly into the air.  It is made by chemicals (NOx and VOC). Industrial facilities, power plants, car and truck exhaust, gasoline vapors, and chemical solvents are important sources of NOx and VOC.1 These sources must be controlled to reduce ozone.  In Detroit, emissions of VOCs appear to contribute the most to ozone. Therefore reducing VOC emissions will have the greatest impact on reducing ozone.2,3 Emission controls such as catalytic converters, vapor recovery, and product reformulations can help reduce VOC emissions.

HOW DOES OZONE AFFECT YOUR HEALTH?

Even at low levels, ozone can cause a number of respiratory and other health effects.  Ozone increases your risk of the following: 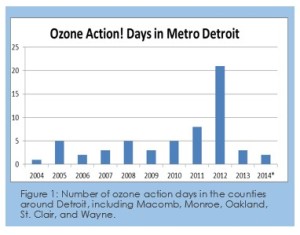 Urban areas, including Detroit, issue “ozone action days” when ozone levels are high. In Michigan, ozone is monitored by the Michigan Department of Environmental Quality (MDEQ). Currently, MDEQ and the US Environmental Protection Agency have designated Michigan to be “in attainment” with the National Ambient Air Quality Standard (NAAQS) for ozone.8  This means ozone levels do not exceed current   standards. However, each year there are days when ozone levels are higher than what is considered healthy for some people, such as those with asthma.Ozone action days can result from higher temperatures. With climate change, ozone pollution may become increasingly challenging, see figure 1, there was an unusual number of  hot days in 2012.

Some groups are at risk of negative health effects due to higher levels of exposure to ozone pollution.  These include those living near a major highway and those spending long hours outdoors.  Other groups are at risk because they can experience stronger adverse health effects to ozone pollution. Children have the highest risk for developing health problems from ozone because their lungs are developing, and they spend more time outside when ozone levels can be highest.1 High ozone levels are also particularly unhealthy for people with existing respiratory disease, such as asthma.  Other groups vulnerable to ozone pollution include older adults, people exercising or working outdoors, and people with cardiovascular disease.9

HOW TO REDUCE AND AVOID EXPOSURE TO OZONE