WHAT IS PARTICULATE MATTER?

Airborne particulate matter, also known as PM or particle pollution, is a mixture of extremely small particles and liquid droplets that can include acids, organic chemicals, metals, soil and dust particles, and biological matter such as fungal spores. Smaller particles pose a health concern because they can be inhaled into and accumulate in the lungs. Particles less than 2.5 micrometers in diameter, called PM2.5 or “fine” particulate matter, pose the greatest health risks. Because of their small size (about 1/30th the width of a human hair), these tiny particles penetrate deeply into the lungs.1,2

WHERE DOES PARTICULATE MATTER COME FROM?

PM comes from many sources and is often too small to see directly with the human eye. Sometimes you can see a “haze” in the atmosphere that results from PM (and not humidity).  Outdoors, important sources include cars, trucks, trains, construction equipment, power plants, incinerators, fireplaces, burning leaves and brush, and some industrial processes.  “Coarse fraction” particulate matter, with a diameter between 2.5 and 10 micrometers, is due to crushing and grinding operations, as well as windblown dust from roads and fields.1 PM also results from chemical reactions involving combustion gases, organic vapors, ammonia and ozone.  Indoors, PM can come from cigarette smoking and cooking (especially frying), woodstoves, candles, or from outdoor air that comes into houses or buildings. 2 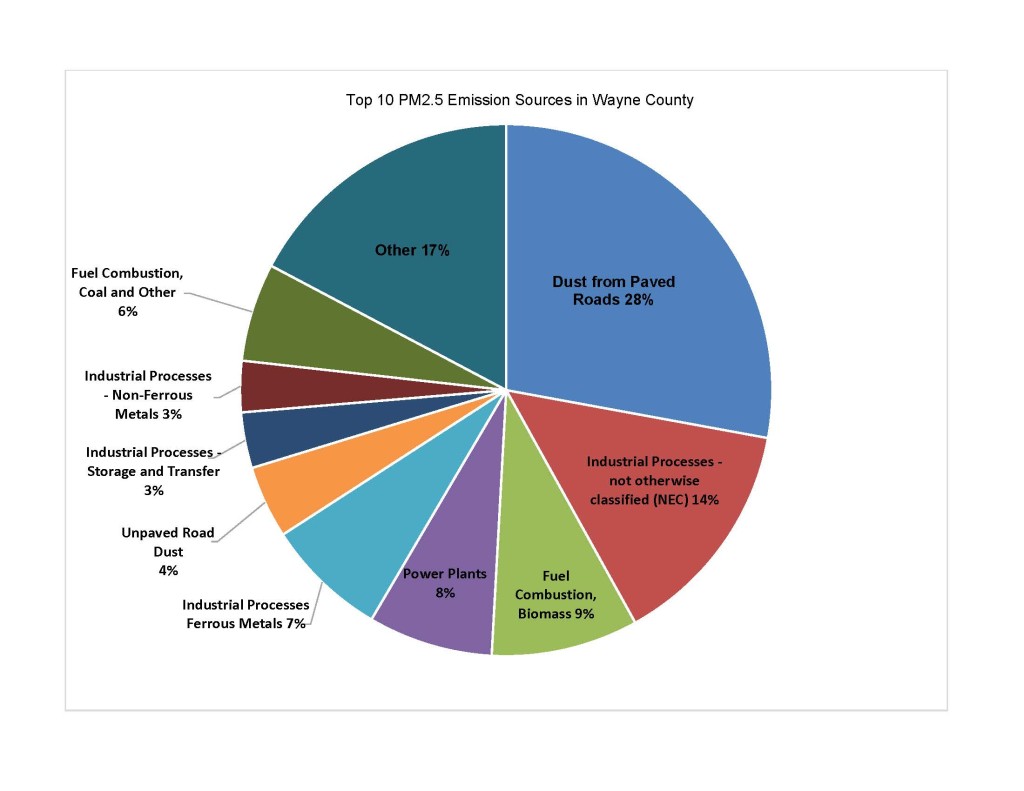 HOW DOES PARTICULATE MATTER AFFECT YOUR HEALTH?

Exposure to PM, particularly PM2.5, can cause or worsen a number of diseases and can cause death.  PM2.5 can increase your risk of the following:3, 4, 5

PM levels across Detroit have declined in recent years and now meet the US Environmental Protection Agency standards.3 However, even at their current levels, there are effects of PM on health, including blood pressure, asthma, and birth outcomes.  In addition, some areas of Detroit have higher PM levels, including areas near major highways and large industrial emitters.

The top industrial emitters of PM2.5 in Wayne County include a large coal-fired power plant, two steel mills, an oil refinery, and a large cement producer.6  Portions of Detroit downwind from such sources may experience higher PM levels.7

About one out of every three people in the USA is at risk of experiencing PM2.5 related health effects.  Some people are more likely to be exposed to unhealthy levels of PM, and to suffer negative health effects.2 People at risk of higher exposure levels include those who work or are active outdoors and those who live near major sources, including large industry and major roadways. 3

Some populations are more likely to have adverse health effects of PM. Individuals at risk include: infants, children-especially if very active during high pollution periods, people over 65 years of age, people with lung diseases such as asthma, chronic obstructive pulmonary disease (COPD), chronic bronchitis and emphysema, people with heart disease or diabetes, and those with lower incomes . 3

HOW TO REDUCE AND AVOID EXPOSURE TO PARTICULATE MATTER